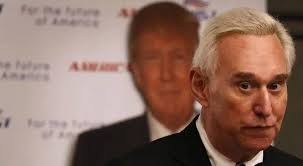 WASHINGTON — Roger Stone, a longtime Republican operative and ally of President Donald Trump, said Sunday he is "prepared" to be indicted as part of special counsel Robert Mueller's investigation if that's where the probe leads.

"I am prepared should that be the case," Stone said on "Meet The Press" after being asked if he was ready for a possible indictment. "But I think it just demonstrates, again, this was supposed to be about Russian collusion, and it appears to be an effort to silence or punish the president's supporters and his advocates."

Stone reiterated that he felt Mueller's team has found "no evidence whatsoever of Russian collusion," so he speculated that they may work to connect him to other crimes instead.

"It is not inconceivable now that Mr. Mueller and his team may seek to conjure up some extraneous crime pertaining to my business, or maybe not even pertaining to the 2016 election," Stone said. "I would chalk this up to an effort to silence me."