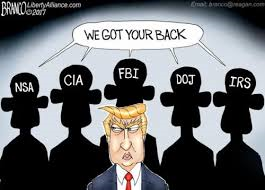 Who, what, where, when, why? The desiderata school teachers drill into their charges trying to master effective writing skills apply also in the effort to understand that byzantine drama known to the world as the Trump-Russia-collusion investigation.

Let's start with "when." When did it start? We know that the FBI opened its official investigation on 31 July 2016. An obscure, low-level volunteer to the Trump campaign called Carter Page was front and centre then. He'd been the FBI's radar for a long time. Years before, it was known, the Russians had made some overtures to him but 1) they concluded that he was an "idiot" not worth recruiting and 2) he had actually aided the FBI in prosecuting at least two Russian spies.

But we now know that the Trump-Russia investigation began before Carter Page. In December 2017, The New York Times excitedly reported in an article called "How the Russia Inquiry Began" that, contrary to their reporting during the previous year, it wasn't Carter Page who precipitated the inquiry. It was someone called George Papadopoulous, an even more obscure and lower-level factotum than Carter Page. Back in May 2016, the twenty-something Papadopoulous had gotten outside a number of drinks with one Alexander Downer, an Australian diplomat in London and had let slip that "the Russians" had compromising information about Hillary Clinton. When Wikileaks began releasing emails hacked from the Democratic National Committee in June and July, news of the conversation between Downer and Papadopoulos was communicated to the FBI. Thus, according to the Times, the investigation was born.