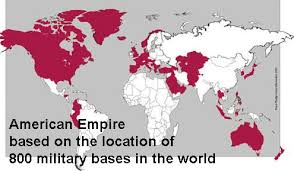 It is easy to say that Trump is failing on the one thing I thought made him a better candidate than most others two years ago and that is on the issue of war and empire.  Well, that and he was a great stick in the eye of those who work hard to control the narrative.

I must admit, in many ways he is turning out even better than I had hoped…well, if we all (literally) survive his time in office.

Internationally, can you think of a time in your lifetime when the United States government so consistently and widely – and openly – made itself a pariah?  For the Europeans, it is the Iran nuclear deal; for East Asians, it is North Korea; for Arabs not associated with the Kingdom…well, that's pretty much the same as always, but Nikki Haley has a way of putting an exclamation point on it, doesn't she.

On trade it's the TPP, NAFTA, China dumping, etc.  Every action drives allies away and drives all players to find ways to circumvent or avoid US markets, the US Dollar, US technology, etc.

Nationally…the election itself made clear the divide in America – the red counties vs. the blue counties; the deplorables vs. the "civilized."  We have the NFL and the flag – America, love it or leave it has come back in vogue.  All thanks to the Donald.

Any time Trump feels that he has been stomped on too much, all he has to do is this. Require the judicial system, to require that an injury to a man/woman be shown in every trial, by the injured MAN/WOMAN getting on the stand and stating it. This is required by law, anyway. But because of the ignorance of the people, it has slipped through the cracks in most trials. See the Marc Stevens video at https://www.youtube.com/watch?v=9NEa7e0il6Y. This is also one of the major points that Karl Lentz is pointing out in his common law videos. - If Trump starts tweeting this, and tweeting it with instructions to the people on how to defend themselves, the whole Deep State will go so crazy that they will collapse themselves with their own panic.