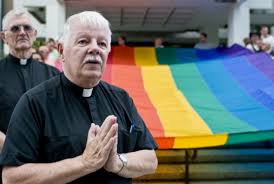 Bishops in the diocese of Lichfield have issued new guidance to parishioners and clergy reminding them that LGBT people "can be called to roles of leadership and service in the local church".

The guidance, titled "welcoming and honouring LGBT+ people", warns that the church's reputation as being unwelcoming towards gay and transgender people is stopping young people attending.

"We very much hope that they, like everyone else, feel encouraged to serve on PCCs, or as churchwardens and worship leaders, for instance, and are supported in exploring vocations to licensed lay and ordained ministries," the guidance says.

"Nobody should be told that their sexual or gender identity in itself makes them an unsuitable candidate for leadership in the Church."

The group, led by diocesan bishop The Rt Revd Dr Michael Ipgrave, also warn against "intrustive questioning about someone's sexual practices or desires, or their experience of gender", saying it is "almost always inappropriate".