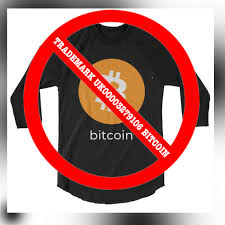 Multiple reports and public filings have shown a UK-based firm called 'A.B.C. IPHoldings South West' has successfully acquired a trademark for the name 'Bitcoin'. According to a merchant on Etsy, IP-Holdings sent a cease and desist order because they were selling Bitcoin-themed t-shirts.

This week cryptocurrency enthusiasts found out the name 'Bitcoin' had been trademarked using the Intellectual Property Office (IPO) in the UK on December 22, 2017. The news came as a shock to one merchant who was selling t-shirts on Etsy with the Bitcoin name and was told to stop his operations or be held liable in a court of law. The letter states:

Contacting the company is difficult as there is very little information on the London-headquartered firm called IP-Holdings — minus one other patented IP product called 'Westworld.' The trademark itself, filed this past December, reveals a list of goods that can't bear the name without permission such as adult clothing, infants' clothing, shoes, headbands, socks, and nearly everything that can be manufactured into a product. Trademark number 'UK00003279106 Bitcoin' was officially registered into the IPO's records on April 13, 2018.