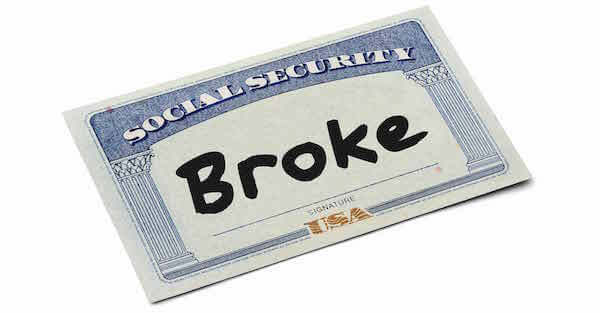 Are you depending on Social Security and Medicare for your retirement?

You might want to rethink that plan. These government retirement programs are going broke even faster than expected.

For the first time since 1982, Social Security will have to dip into its $3 trillion trust fund in order to cover benefits this year.

In other words, the program's expenses will exceed its revenue. Analysts knew this was going to happen, but it happened three years earlier than they projected just last year.

Social Security has dipped into the trust fund before, but analysts project this is the beginning of a long-term trend with no sign of reversal.

According to the annual report recently released by Social Security and Medicare trustees, the trust fund will completely run out of money in 2034. According to the Wall Street Journal, "Social Security will no longer be able to pay its full scheduled benefits unless Congress takes action to shore up the program's finances. Without any changes, recipients then would receive only about three-quarters of their scheduled benefits from incoming tax revenues."

And if you're counting on Medicare to take care of your healthcare needs, that doesn't look like a very good plan either. The trustees project its hospital insurance fund will run out of money in 2026 – three years earlier than last year's report.

Both Medicare and Social Security suffer from the same fundamental economic problem. As the WSJ put it, "The nation's aging population is boosting the costs of Social Security and Medicare, while revenue gains lag due to slower growth in the economy and the labor force."

In other words, the program spends more money than it takes in.

Of course, this is what eventually happens with every Ponzi scheme. And make no mistake, both of these programs are quintessential Ponzi schemes. They depend on current contributors to pay the obligations to those who got into the scheme earlier. This works fine until the number of new people coming into the scheme starts to taper off. If you read between the lines of the WSJ description of Social Security, it's obvious that it's a failing Ponzi scheme.

The Social Security program works by using payroll taxes paid by workers and employers to pay for retirees' benefits. What is left over is invested in the trust fund. Interest earned is reinvested in the fund. Over time, the trust fund has grown to nearly $3 trillion. But long-running demographic trends threaten its finances. Last year, there were 2.8 workers for every Social Security recipient, down from 3.3 in 2007."

The mainstream will tell you not to worry. The government will fix everything. Treasury Secretary Steve Mnuchin said the Trump administration's tax cuts and reductions in regulation will boost economic growth and generate new income for these programs.

That's great – if you really believe the government that created this mess will actually fix it. We've already explained why the tax cuts won't generate the promised economic growth.

And yet, millions of Americans are depending on Social Security to fund their retirement. According to data recently released by Northwestern Mutual, one-third of Americans have less than $5,000 in retirement savings.

The Siren Song of Social Security and Socialism

Social Security, Freedom, and the Constitution

2 Billion Retirees In the Next Few Years

They've Taken Your Job, Your Business, Your Freedom and Now They Are Coming...

Opinion: Why your Social Security could feel like a lot less next year

HOW TO RESCIND THE SOCIAL SECURITY NUMBER

The Big Con of Social Security and Medicare