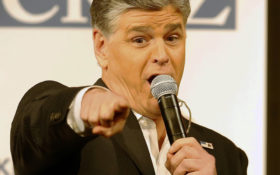 Did Fox News star Sean Hannity finally go too far? What the conservative news giant said on his Wednesday "Hannity" show has critics howling in anger — and demanding he be locked up.

Unfortunately for these liberal critics, they're demanding Hannity be jailed for describing former Secretary of State Hillary Clinton's exact actions.

If they think Hannity needs to be locked up… what must they think about Hillary?

Hannity said that, if he advised them to follow Hillary's lead, they'd use acid and a hammer on their phones before turning them over to Mueller.

"They are demanding that witnesses turn in their phones so that team Mueller …  get to review all of their electronic communication. He wants the phones turned over. Even texts on what are called encrypted apps, like Whatsapp or Signal," Hannity said.

"Maybe Mueller's witnesses… I don't know. If I advised them to follow Hillary Clinton's lead? Delete all your emails, and then acid wash the emails and hard drives on your phones. Then take your phones and bash them with a hammer into itsy, bitsy pieces. Use BleachBit. Remove the sim cards. And then take the pieces and hand it over to Robert Mueller and say, 'Hillary Rodham Clinton! This is equal justice under the law!'" Hannity quipped.

Ep. 1272 The Democrats Want You Silenced

Who Would Have Known?

Neoliberal Economics Destroyed the Economy and the Middle Class

Against The Left: With Lew Rockwell by Ron Paul

Are Democrats Now The Party Of War?