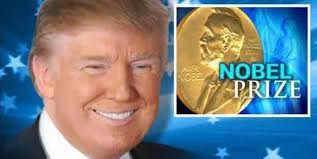 Following what appears to be a successful first meeting with North Korean leader Kim Jong Un, U.S. President Donald Trump has been nominated for the Nobel Peace Prize by two Norwegian lawmakers. Though the deadline for this year's prize has already passed, the nomination should make Trump eligible for the prize in 2019.

U.S. President Donald Trump was nominated for the Nobel Peace Prize for his work in reaching an agreement to work toward de-nuclearization of the Korean peninsula.

Nominations for the world's most coveted prize are open to lawmakers, academics and researchers from around the world. The Nobel Committee in Oslo typically receives hundreds of nominations each year, and past candidates have also included Russian President Vladimir Putin and Former Cuban leader Fidel Castro. A record 330 people were nominated this year.

While supporters of the President are praising the nomination as evidence of Trump's good will and desire to maintain stability and world peace on the Korean Peninsula, not everyone agrees.

Leading left-leaning web site The Huffington Post highlighted in a headline that the lawmakers who voted for trump were part of Norway's far right:

What is nonviolent action?

Who Poses the Greater Threat to Peace: An Impetuous President or 'Experienced Advisers' Who

Is There a Peaceful Solution to the Iranian Conflict?