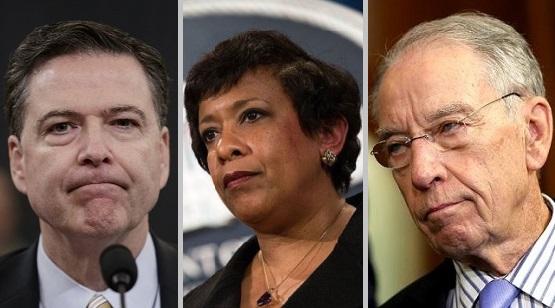 "I will want to subpoena him," Grassley said of Comey during an appearance on C-SPAN's Newsmakers."

The Iowan added that committee rules require that he and Feinstein "agree to it, and at this point I can't tell you if she would agree to it. But if she will, yeah, then we will subpoena." -Politico

Feinstein may be hesitant to sign on, as she says she thinks Comey acted in good faith - which means she thinks Congress shouldn't have a crack at questioning a key figure in the largest political scandal in modern history.

"While I disagree with his actions, I have seen no evidence that Mr. Comey acted in bad faith or that he lied about any of his actions," said Feinstein during a Monday Judiciary panel hearing. Former Feinstein staffer and FBI investigator Dan Jones, meanwhile, continues to work with Christopher Steele and Fusion GPS on a $50 million investigation privately funded by George Soros and other "wealthy donors" to continue the investigation into Donald Trump.

Comey skipped out on appearing before Grassley's committee this week following the June 14 release of DOJ Inspector General Michael Horowitz's (OIG) report on FBI conduct during the Hillary Clinton email investigation - which dinged Comey for being "insubordinate" and showing poor judgement. Horowitz is conducting a separate investigation into the FBI's counterintelligence operation on the Trump campaign, including allegations of FISA surveillance abuse.

What your FBI agent sees