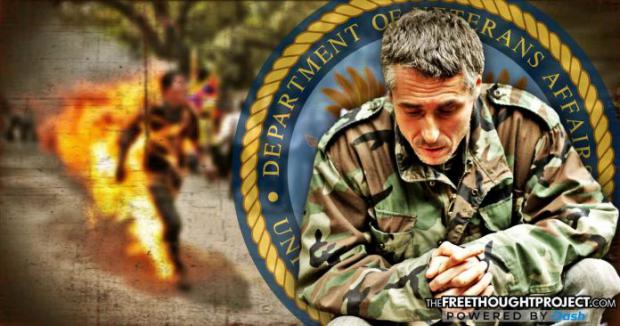 A veteran protesting the VA, burned 90 percent of his body when he strapped homemade incendiary devices to himself and covered himself in flammable liquid.

Atlanta, Georgia – In a horrific scene that was meant to raise awareness about the cruel treatment he endured from the Department of Veterans Affairs, an Air Force Veteran used a combination of fireworks and gasoline to set himself on fire.

John Michael Watts, 58, approached the Georgia Capitol in downtown Atlanta around 10:45 a.m. on Tuesday and within minutes, he was engulfed in flames that burned 90 percent of his body.

Georgia State Patrol Capt. Mark Perry told the Atlanta Journal-Constitution that  Watts appeared to have attached "homemade incendiary devices and firecrackers" to his body and covered himself in "some kind of flammable liquid" and then "attempted to set himself on fire."

"Almost simultaneously, one of the Capitol Troopers saw what was happening and came out, and actually had a fire extinguisher and was able to douse him pretty quickly," Perry said. "The subject has now been transported to Grady [Memorial Hospital] via EMS."