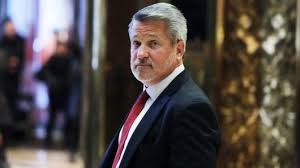 Bill Shine, the former co-president of Fox News, is in final talks to take over the post of White House communications director.

The New York Times reported, based on sources, that Shine was offered the job by Trump.

Shine, a longtime executive at the network, served as its co-president for nearly 10 months after the ouster of longtime head Roger Ailes amidst a wave of sexual harassment allegations.

Shine, considered by many to be Ailes' protege at the network, left Fox News himself in the wake of a network-wide housecleaning, but has denied wrongdoing in the handling of sexual harassment allegations.

Since leaving the network Shine has reportedly been in contention for a position in the White House. He has also spent much of his time, Politico reported, down at President Donald Trump's Mar-a-Lago resort in Florida along with mutual friend Sean Hannity.