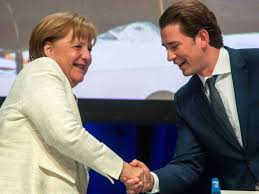 And by 31, the debonair university dropout with the slicked-back mane and the Hollywood grin became the world's youngest leader.

Now, just six months into his term as chancellor, Kurz is seizing a febrile moment in European politics to make himself into one of the continent's true power players.

In the next few weeks alone, he is trying to seal off Europe from asylum seekers arriving by sea, orchestrate a summit between President Donald Trump and Russian President Vladimir Putin and, critics say, undermine Germany's Angela Merkel, the most consequential European leader of the past decade.

The 63-year-old, four-term Merkel could see her government collapse as soon as this weekend. If it does, she will have mutinous members of her own conservative bloc to blame. But equally important will be the role of Kurz, who has repeatedly appeared in public with the German rebels to bolster their zero-tolerance immigration stance and not so subtly take aim at his fellow chancellor.