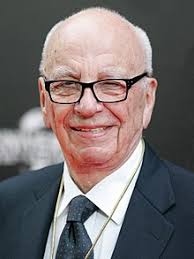 It all started with a few glasses of wine and two media titans talking about how hard life is.

Rupert Murdoch, the 87-year-old founder and co-executive chairman of 21st Century Fox and News Corp., and Bob Iger, the 67-year-old chief executive of the Walt Disney Co., met last August at Murdoch's Moraga vineyard in the Bel Air hills of Los Angeles and discussed the myriad challenges their multibillion-dollar corporations faced, according to two people familiar with the discussion.

Facebook, Amazon, Netflix and Google were dwarfing their old-media conglomerates. As much as Murdoch liked positioning himself as the underdog and outsider, these new digital competitors were turning out to be too much.

Not long after Iger drove away from that conversation (and after other meetings Murdoch and his sons held with Verizon and Comcast), the two men sketched out a deal that involves Murdoch selling the bulk of the company to Disney, but retaining a large stake in the combined entity. The proposed $70 billion agreement requires Iger to remain as CEO.

Aside from the big payday, it is a seminal moment for Murdoch, who is turning over the power to run the company he has spent his career building. The media mogul is saying goodbye to his life's work.

Murdoch's decision to sell part of his empire is the end of an era. It could be viewed as a surrender, a sign that he's given up trying to match the might of digital companies that are able to pay top dollar to churn out television series, movies and comedy specials like candy. But it might turn out to be Rupert Murdoch's most deft move yet, the one where he saves his company, and fortifies his family fortune.

"Rupert is in the best of all possible worlds here," media and telecom billionaire John Malone, a longtime rival and confidant of Murdoch's, said in an interview.

The value of 21st Century Fox has risen by roughly $40 billion, to $91 billion, since CNBC first broke the story of Disney's interest. To those who know Murdoch, the sale represents a point of personal evolution - a shift from building voraciously to cementing his legacy.

Murdoch created one of the world's most powerful and influential media conglomerates out of two modest Australian newspapers he inherited from his father. But that company, under his leadership, also has survived a series of near disasters: the threat of bankruptcy in 1990; criminal investigations into its British papers hacking into people's voice mails; possible misuse of company funds to cover up sexual harassment allegations at Fox News; and antsy investors who worried that Murdoch was concerned more with empire-building than with their immediate financial gain.