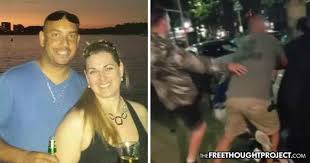 A beloved father and U.S. Navy veteran was mercilessly shot and killed by police while he was acting as a "good Samaritan" and trying to break up a fight.

Portland, OR – A community is outraged after a father and U.S. Navy veteran was shot and killed by police while witnesses claim he was trying to break up a fight, but when his handgun fell out of its holster and he reached to pick it up, police did not hesitate to open fire on him.

Jason E. Washington, 45, will be remembered as a beloved father of three daughters who married his high school sweetheart, served in the Navy, and was working as a U.S. postal worker. He was also the only one who attempted to break up a fight that broke out on a street corner in downtown Portland while nearby police did nothing to help.

Witness Keyaira Smith began filming the encounter, and she told Oregon Public Broadcasting that she believes Washington was just "trying to be a good Samaritan" by attempting to break up the fight, and when two Portland State University Police officers approached the scene, they "did not appear to try to stop the fight."

The video shows Washington attempting to corral a man in a blue shirt, who Smith said was responsible for starting the conflict because he was using racial slurs against a Black man nearby.

"The guy in blue had used some racial slurs earlier when they were in the street kiddy corner to where they were in this video and that's what brought it to this point, and started the whole thing," Smith said.

At one point, the handgun Washington was carrying in a holster on his right hip becomes visible, and then Washington tripped.

"The gun slipped out of the holster when he had fallen, and I think he may have tried to retrieve it," Smith said. "Then they said 'gun.'"

Buckle Up! The Crackdown Has Begun

What If Jesus Had Been Born In The American Police State?

COVID-19 VACCINATION: Whatcha Gonna Do When They Come For You?

Orwell Tried To Warn Us About 1984 But No One Listened!