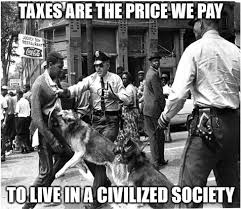 A common sentiment among proponents of government and centralized authority is that "taxes are the price we pay to live in a civilized society." In reality, however, the state's hunger for tax revenue and control directly undermines well-intentioned humans' efforts to be civil to each other.

Punished for helping strangers in need

In Navi Mumbai, India, the police recently fined a car owner 2,000 rupees. His offense? He offered a ride to strangers who were stranded in the rain. From the Hindustan Times' summary of the shameful incident:

"Nitin Nair, an employee of a finance consultancy in Navi Mumbai, said he was fined near Airoli Circle last Monday and the on-duty officer took his driving licence for offering [a] lift to three men, who were stuck at a bus stop during a downpour. Nair said the officer issued him an e-challan and asked him to collect his licence from the chowkie (police station) after paying fine."

Apparently, it is illegal in India for private car owners to offer rides to strangers. The police later issued a "clarification," noting that they only penalize motorists who they believe "might take money from people," which is considered an offense.

"Only a vehicle with a yellow number plate (tourist vehicle) can charge passengers. We have observed that drivers charge anywhere between Rs 30 to Rs 50 for dropping people to Panvel, Belapur, Kharghar and Vashi from Airoli junction," said a traffic police officer, according to the Times.

Even if not every motorist is penalized, the fact that anybody driving with passengers can be stopped at a police officer's whim and questioned and treated like an outlaw is enough to discourage people from helping those who need a ride.

As if that makes things any better. Even if not every motorist is penalized, the fact that anybody driving with passengers can be stopped at a police officer's whim and questioned and treated like an outlaw is enough to discourage people from helping those who need a ride.

This is especially troubling during monsoons. When it rains heavily in Mumbai, public transportation virtually shuts down, and it is next to impossible to get an auto-rickshaw or a cab. In such cases, most people rely on assistance from good samaritans such as Mr. Nair to get around.

The government, however, cares more about the license fees and tax revenues it gets from commercial transportation services than it does about people being able to get where they need to on time. In its zeal to collect taxes, it is willing to leave thousands of people stranded.

A Pervasive Problem in the "Land of the Free"

Punishing acts of charity is by no means a problem unique to India. In many American cities, for example, it is illegal to feed homeless people, at least until one has obtained a costly permit. For example, the city of Tampa, Florida, requires people to have $1 million in liability insurance and pay an additional sum of money to the local government for permission to feed the homeless.