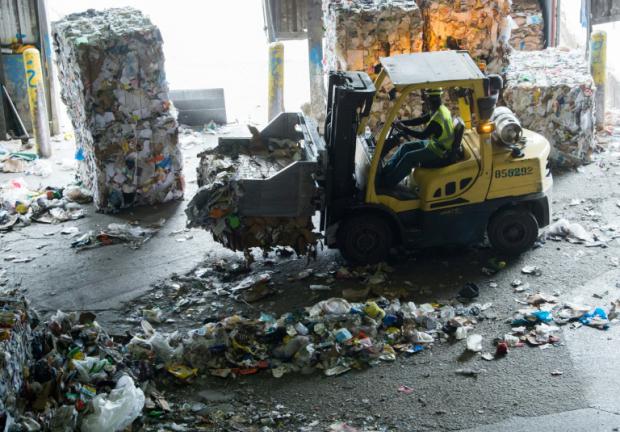 For months, a major recycling facility for the greater Baltimore-Washington area has been facing a big problem: it has to pay to get rid of huge amounts of paper and plastic it would normally sell to China.

Beijing is no longer buying, claiming the recycled materials are "contaminated."

For sure, the 900 tons of trash dumped at all hours of the day and night, five days a week, on the conveyor belts at the plant in Elkridge, Maryland -- an hour's drive from the US capital -- are not clean.

Amid the nerve-shattering din and clouds of brown dust, dozens of workers in gloves and masks -- most of them women -- nimbly pluck a diverse array of objects from the piles that could count as "contaminants."

That could be anything from clothes to cables to tree branches to the bane of all recyclers: plastic bags, which are not supposed to go in recycling bins because they snarl up the machinery.

"We've had to slow our machinery, and hire more people" to clean up the waste, says Michael Taylor, the head of recycling operations for Waste Management, the company that runs the plant.

At the end of the sorting line is the end product -- huge bales of compacted waste containing paper, cardboard or plastics.

These have been bought up for decades by businesses, most of them based in China, which clean them up, crush them and transform them into raw materials for industrial plants.

Last year, China bought up more than half of the scrap materials exported by the United States.

Globally, since 1992, 72 percent of plastic waste has ended up in China and Hong Kong, according to a study in the journal Science Advances.

But since January, China has closed its borders to most paper and plastic waste in line with a new environmental policy pushed by Beijing, which no longer wants to be the world's trash can, or even its recycle bin.

For other waste products such as cardboard and metal, China has set a contamination level of 0.5 percent -- a threshold too low for most current US technology to handle.

US waste handlers say they expect China will close its doors to all recycled materials by 2020 -- an impossibly short deadline.

"There is no single and frankly, probably not even a group of countries, that can take in the volume that China used to take," warns Adina Renee Adler of the Washington-based Institute of Scrap Recycling Industries.

Google "plasma garbage converter." - "Eliminates the need for land fills, freeing up additional space for other purposes. Provides a means to potentially mine old land fills, which eliminates the leaching and other contamination issues associated with land fills; including the resultant methane production which is a significant green house contributor. PWC is the ultimate in recycling since all organics are turned into energy and all metals and in-organics are fed back into the economy without the need for sorting or separate handling. PWC provides distributed generation capacity. As a result, restructuring the National Power Grid to distribute the power would not be a part of the cost equation. If utilized nationally PWC would provide about 70 Gigawatts of distributed generation. Provides a significant decrease in Green House gases." - http://www.kva-engineering.com/plasma_waste_converter.html

Families of US Embassy personnel in Ukraine ordered to begin evacuating...