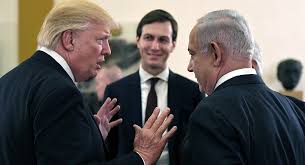 Here's a shocker: Donald Trump and his Palestine-Israel fixers think they can buy a peaceful and permanent settlement of the 70-year conflict by getting Arab governments to pressure the Palestinians into forgetting the "politicians' talking points" – you know, superficial things like independence from the routine abuses and indignities of colonial oppression (that's right; the same trifles Americans celebrated on July 4) – and focusing instead on what really matters: roads, jobs, and money.

In Trumpworld, everyone and everything – including the longing for justice – has a price.

According to many indications and chief envoy/Trump son-in-law Jared Kushner's own interview with the Palestinian newspaper Al Quds, the Trump plan is to have Saudi Arabia, the United Arab Emirates, and Egypt gang up on the Palestinians in order to compel them to accept money for economic development in return for dropping their demands for a sovereign and independent state free of Israeli domination, that is, a state consisting of (most of) the West Bank and Gaza Strip with its capital in East Jerusalem. Instead of insisting that Israel withdraw from the lands conquered in and occupied since the 1967 war, dismantle its illegal settlements, and tear down its wall (which runs not along the 1967 border but through the West Bank), the Palestinians are expected to accept promises of outside investment in infrastructure and jobs. Their "state" would consist of a few disconnected villages, presumably isolated Gaza, and a capital in a Jerusalem suburb.