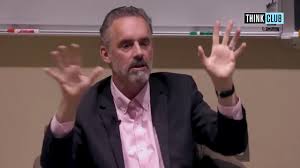 Dr. Jordan B Peterson was raised as a Christian conservative, and began questioning religion in his early teens. He criticizes the New Atheists (specifically Richard Dawkins and Sam Harris) for oversimplifying the philosophy of Christianity when making their critiques. Peterson often points to the symbolic underlying meaning of the archetypal ideas in religious mythology when explaining his understanding of religion.

He grew up in Fairview, Alberta, Canada, a small town of 3,000 people 580 km (360 mi) northwest of Edmonton, Alberta. He resided in Montreal from 1985 to 1993, where he studied under the supervision of Robert O. Pihl and Maurice Dongier. From 1993 to 1998 he lived in Arlington, Massachusetts, while teaching and conducting research at Harvard. He has resided in Toronto since 1998.

At the age of 13, Peterson had joined the New Democratic Party (NDP). He remained continually active with party until the age of 18. He has two bachelor degrees from the University of Alberta. His first was in political science. After visiting Europe, Peterson became extremely interested in the psychological unpinning that created the circumstances of the Cold War and its origins within the Second World War. After this experience, he returned to the university to complete another bachelor in psychology.