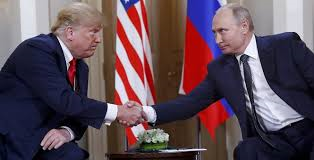 Under the Constitution, these are the offenses for which presidents can be impeached.

And to hear our elites, Donald Trump is guilty of them all.

Trump's refusal to challenge Vladimir Putin's claim at Helsinki – that his GRU boys did not hack Hillary Clinton's campaign – has been called treason, a refusal to do his sworn duty to protect and defend the United States, by a former director of the CIA.

Famed journalists and former high officials of the U.S. government have called Russia's hacking of the DNC "an act of war" comparable to Pearl Harbor.

The New York Times ran a story on how many are now charging Trump with treason. Others suggest Putin is blackmailing Trump, or has him on his payroll, or compromised Trump a long time ago.

Wailed Congressman Steve Cohen: "Where is our military folks? The Commander in Chief is in the hands of our enemy!"

Apparently, some on the left believe we need a military coup to save our democracy.