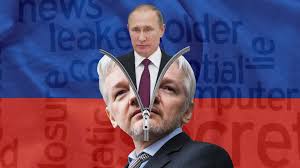 One thing that's not receiving enough attention in the respective Assange and Russia coverage is to what extent both protagonists are needed in each other's narratives to keep each of these alive. Without explicitly linking Assange to Russia, allegations against him lose a lot, if not most, of their credibility. Likewise, if Assange is not put straight in the middle of the Russia story, it too loses much. Linking them is the gift that keeps on giving for the US intelligence community and the Democratic party.

In that light, as the shameful/shameless treatment of Julian Assange continues and is on the verge of even worse developments, I was wondering about some dates and timelines in the whole sordid affair. And about how crucial it is for those wanting to 'capture' him, to tie him to Russia in any form and shape they can come up with and make halfway credible.

10 days ago in The True Meaning of 'Collusion', I mentioned how Robert Mueller in his indictment of 12 Russians -but not Assange-, released on the eve of the Trump-Putin summit, strongly insinuated that WikiLeaks had actively sought information from Russians posing as Guccifer 2.0, that would be damaging to Hillary Clinton. I also said that Assange was an easy target because, being closed off from all communication, he cannot defend himself. From the indictment:

a. On or about June 22, 2016, Organization 1 sent a private message to Guccifer 2.0 to "[s]end any new material [stolen from the DNC] here for us to review and it will have a much higher impact than what you are doing." On or about July 6, 2016, Organization 1 added, "if you have anything hillary related we want it in the next tweo [sic] days prefable [sic] because the DNC [Democratic National Convention] is approaching and she will solidify bernie supporters behind her after." The Conspirators responded, "ok . . . i see." Organization 1 explained, "we think trump has only a 25% chance of winning against hillary . . . so conflict between bernie and hillary is interesting."

Now, the indictment itself has been blown to shreds by Adam Carter, while the narrative that the Russians hacked DNC servers and provided what they stole to WikiLeaks, has always categorically been denied by Assange, while the Veteran Intelligence Professionals for Sanity (VIPS) and others have concluded that the speed at which the info was downloaded from the servers means it couldn't have been a hack.

Oh, and Carter left little standing of Mueller et al's portrait of Guccifer 2.0 as being of Russian origin. Plus, as several voices have pointed out, Assange had said on British TV on June 12 2016, ten days before the date the indictment indicates, that WikiLeaks was sitting on a batch of material pertaining to Hillary Clinton. An indictment full of allegations, not evidence, that in the end reads like Swiss cheese.

But it does serve to keep alive, and blow new fire into, the "The Russians Did It" narrative. And obviously, it also rekindles the allegation that Assange was working with the Russians to make Trump win and Hillary lose. Allegations, not evidence, against which neither Assange nor "the Russians" are in a position to defend themselves. Very convenient.

In his June 25 article How Comey Intervened To Kill Wikileaks' Immunity Deal, The Hill's John Solomon details how negotiations in early 2017 between legal representatives for Julian Assange and the US Justice Department were suddenly halted when James Comey, then FBI director, and Sen. Mark Warner (D-Va.) suddenly and entirely unexpectedly told Adam Waldman, Assange's attorney, and David Laufman, then head of Justice's counterintelligence and export controls section, who had been picked to lead the talks, to stand down.

Eyewitness To The Agony Of Assange

Eyewitness To The Trial and Agony of Julian Assange