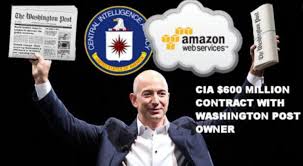 "The CIA says" is never a great way to start a sentence. But that's one basis of the charge that Russia "hacked" the US presidential election.

Members of Congress were secretly briefed by the CIA on "the Russian affair," and media, led by the Washington Post, ran with the story that Russia influenced the US election on the side of Trump.

Major media outlets are happy to cite the CIA as an authority—conveniently ignoring the fact that people in the intelligence field are taught to lie. It's their stock in trade.

You might remember the Washington Post's role in defaming and destroying Gary Webb, who, in 1996, published a series of articles in the Mercury News about the CIA seeding black Los Angeles neighborhoods with crack cocaine. The Post basically asked the CIA whether the charge was true, and when the Agency denied it, the Post attacked Webb as a "fake news" reporter. The same Washington Post led the campaign to tie the Russian government to Hillary Clinton's defeat. And the Post, once again, used unproven statements from the CIA to back up their claim.

CNN: Segregate Unvaccinated, Make Them Pay For Tests Every Day