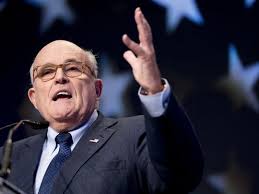 In the past week, former New York Mayor Rudolph Giuliani, now the chief lawyer and principal spokesman for President Donald Trump's legal team, has offered arguments more harmful to Trump than helpful. In a series of combative, disjointed and logically challenged television rants, Giuliani has essentially argued that Trump did not engage in any conspiracy with the Russians for them to provide help to his campaign and that even if he did, it wasn't criminal.

In making this argument, Giuliani has played a word game in which he has effectively created a straw man and then denied it's real because it's made of straw. He has done this by avoiding the use of the word "conspiracy," substituting the word "collusion" and then arguing that there is no crime of collusion and therefore Trump did not commit a crime. This is an argument based on a false premise.

Here is the back story.

When the FBI received word from a former British intelligence source in June 2016 that Russian intelligence agents might be providing assistance to the Trump campaign, it began an investigation of the campaign. After the British source gave the FBI a dossier that alleged salacious behavior by Trump in Moscow in 2013 — behavior he has denied — and purported to corroborate awareness of the behavior by Russian government officials, the FBI used the dossier as part of a presentation to the Foreign Intelligence Surveillance Court, which authorized surveillance of the Trump campaign.

Mueller also discovered the existence of a June 2016 meeting in Trump Tower in New York between high-ranking campaign officials and Russian agents. When The New York Times revealed the meeting a year after it took place, the Trump folks claimed that the meeting was about the difficulties Americans were having adopting Russian children. Then emails emerged showing an offer to Donald Trump Jr. by a Russian agent to meet and provide help to the campaign in the form of dirt on Hillary Clinton. This was dirt allegedly obtained by hacking into her campaign's computers. This was an offer that Don Jr. accepted.

The president has denied any knowledge of this meeting until it emerged publicly in July 2017, and Don Jr. has testified under oath before Congress that his father did not know of the meeting until the media revealed it. But last week, Michael Cohen, a lawyer who represented Trump for the 10 years preceding his inauguration and whose office was three doors down a hall from Trump's, told Mueller and the media that Trump knew of the meeting beforehand and encouraged his campaign folks, including Don Jr., to make it happen.

Is any of this unlawful? That question brings us back to Giuliani.

In Giuliani's zeal to represent his client, he has unleashed vitriolic verbal attacks on the credibility, morality and ethics of Cohen, using words and innuendo too lurid to recount here. Yet the ferocity of Giuliani's attacks is now a problem for Trump. That's because the rules of legal ethics prohibit lawyers from attacking the credibility of likely witnesses against their clients outside the courtroom. This is especially so for government witnesses.