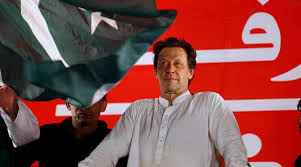 Pakistan, a sprawling nation of 205 million, is hard to govern, even harder to finance, and seething with tribal or religious violence and discord.

But Pakistan, which for me is one of the most interesting and important nations on earth, is by far the leading nation of the Muslim world and a redoubtable military power.  Created in 1947 from former British India as a haven for oppressed Muslims, Pakistan has been ruled ever since by military juntas or by slippery and often corrupt civilian politicians.

After decades of dynastic politics under the Bhutto and Sharif families, there is suddenly hope that newly elected cricket star Imran Khan and his Tehreek-e-Insaf Party (PTI) may – just may – tackle Pakistan's four biggest problems: endemic corruption, military interference, political tribalism, and a half-dead economy.