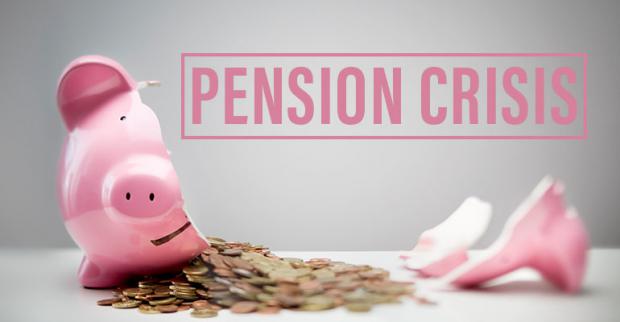 Money manager Rob Arnott and finance professor Lisa Meulbroek have run the numbers on underfunded pension plans and come up with an interesting – and highly concerning – new angle: That they impose a "stealth mortgage" on homeowners. Here's how the Wall Street Journal reported it today:

The Stealth Pension Mortgage on Your House

Most cities, counties and states have committed taxpayers to significant future unfunded spending. This mostly takes the form of pension and postretirement health-care obligations for public employees, a burden that averages $75,000 per household but exceeds $100,000 per household in some states. Many states protect public pensions in their constitutions, meaning they cannot be renegotiated. Future pension obligations simply must be paid, either through higher taxes or cuts to public services.

Is there a way out for taxpayers in states that are deep in the red? Milton Friedman famously observed that the only thing more mobile than the wealthy is their capital. Some residents may hope that they can avoid the pension crash by decamping to a more fiscally sound state.

But this escape may be illusory. State taxes are collected on four economic activities: consumption (sales tax), labor and investment (income tax) and real-estate ownership (property tax). The affluent can escape sales and income taxes by moving to a new state—but real estate stays behind. Property values must ultimately support the obligations that politicians have promised, even if those obligations aren't properly funded, because real estate is the only source of state and local revenue that can't pick up and move elsewhere. Whether or not unfunded obligations are paid with property taxes, it's the property that backs the obligations in the end.

When property owners choose to sell and become tax refugees, they pass along the burden to the next owner. And buyers of properties in troubled states will demand lower prices if they expect property taxes to increase.

It doesn't matter if we own or rent; landlords pass higher taxes on to tenants. Nor does it matter if properties are mortgaged to the hilt or owned outright. In time, unfunded pension obligations will be reflected in real-estate prices, if they aren't already. A state's unfunded liabilities are effectively a stealth mortgage on private property. Think you can pass your property on to your heirs? Only net of the unfunded pension obligations.

We calculated the ratio of unfunded pension obligations relative to property values in each state. We used 3% bond-market yields as our discount rate to measure unfunded obligations, because while other assets ostensibly earn a risk premium above the bond yield, these assets can also underperform.

On average nationwide, unfunded state and local pension burdens represent 20% of real-estate values. This ratio can rival or exceed an owner's home equity, depending on the size of his mortgage. If real-estate prices adjust to reflect unfunded pension obligations, many homeowners' equity could be at risk. As we've seen in Detroit, the public pension stealth mortgage can ultimately devastate the housing market.