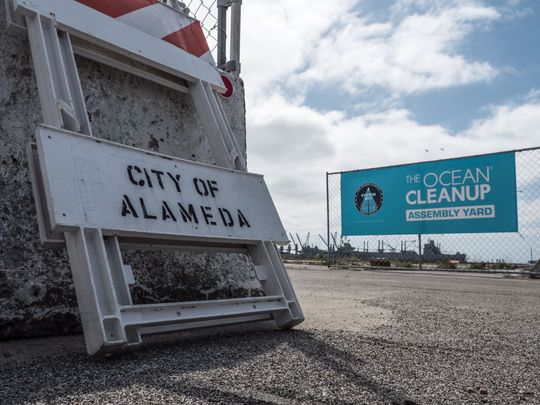 Dubbed the Ocean Cleanup Project, this giant sea sieve consists of pipes that float at the surface of the water with netting below, corralling trash in the center of a U-shaped design.

The purpose of this bizarre gizmo is as laudable as it is head-scratching: to collect millions of tons of garbage from what's known as the Great Pacific Garbage Patch, which can harm and even kill whales, dolphins, seals, fish and turtles that consume it or become entangled in it, according to researchers at Britain's University of Plymouth.

The project is the expensive, untried brainchild of a 23-year-old Dutch college dropout named Boyan Slat, who was so disgusted by the plastic waste he encountered diving off Greece as a teen that he has devoted his life to cleaning up the mess.

Along with detractors who want to prioritize halting the flow of plastics into the ocean, the Dutch nonprofit gathered support from several foundations and philanthropists, including billionaire Salesforce founder Marc Benioff. In 2017, the Ocean Cleanup Project received $5.9 million in donations and reported reserves from donations in previous years of $17 million.