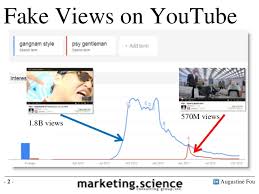 Martin Vassilev makes a good living selling fake views on YouTube videos. Working from home in Ottawa, he has sold about 15 million views so far this year, putting him on track to bring in more than $200,000, records show.

Mr. Vassilev, 32, does not provide the views himself. His website, 500Views.com, connects customers with services that offer views, likes and dislikes generated by computers, not humans. When a supplier cannot fulfill an order, Mr. Vassilev — like a modern switchboard operator — quickly connects with another.

"I can deliver an unlimited amount of views to a video," Mr. Vassilev said in an interview. "They've tried to stop it for so many years, but they can't stop it. There's always a way around."

After Google, more people search on YouTube than on any other site. It is the most popular platform among teenagers, according to a 2018 study by the Pew Research Center, beating out giants like Facebook and Instagram. With billions of views a day, the video site helps spur global cultural sensations, spawn careers, sell brands and promote political agendas.

Just as other social media companies have been plagued by impostor accounts and artificial influence campaigns, YouTube has struggled with fake views for years.

The fake-view ecosystem of which Mr. Vassilev is a part can undermine YouTube's credibility by manipulating the digital currency that signals value to users. While YouTube says fake views represent just a tiny fraction of the total, they still have a significant effect by misleading consumers and advertisers. Drawing on dozens of interviews, sales records, and trial purchases of fraudulent views, The New York Times examined how the marketplace worked and tested YouTube's ability to detect manipulation.

Inflating views violates YouTube's terms of service. But Google searches for buying views turn up hundreds of sites offering "fast" and "easy" ways to increase a video's count by 500, 5,000 or even five million. The sites, offering views for just pennies each, also appear in Google search ads.

To test the sites, a Times reporter ordered thousands of views from nine companies. Nearly all of the purchases, made for videos not associated with the news organization, were fulfilled in about two weeks.