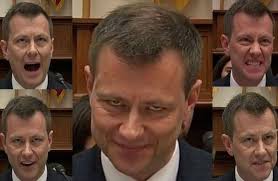 FBI Special Agent Peter Strzok was fired by the bureau on Friday over a series of controversial anti-Trump text messages which Peter Strzok and his former lover Lisa Page had exchanged during the run-up to the 2016 presidential election.

However, the press has failed to report that Strzok was an agent for both the FBI and CIA at the same time.

That's right, not only was Strzok employed by the FBI until his abrupt public departure from the bureau on Monday, Strzok has been sheep-dipped by the CIA where he currently remains employed to this day. (i.e. Strzok's termination from the FBI on Monday was nothing more than a dog and pony show as Strzok remains an integral member of the deep state)

As I originally reported in mid-July, a sheep-dipped Peter Strzok worked for both the FBI and CIA at the time.

Hello! People! This is big!

Both the FBI and CIA have played the American people for fools by not disclosing the fact that Peter Strzok is a double agent of the U.S. government and has been sheep-dipped by the CIA.

A sheep-dipped Peter Strzok has been covertly operating as the Section Chief of the Central Intelligence Agency's Counterespionage Group during his secret 24 year tenure with the agency while masquerading as Deputy Assistant Director of the Federal Bureau of Investigation's Counterintelligence Division where he was in charge of investigating Hillary Clinton's use of a personal email server along with the investigation into Russian interference in the 2016 United States elections.