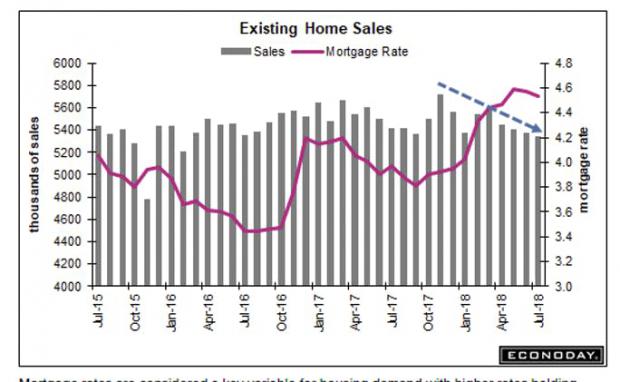 The Econoday consensus estimate for home sales was 5.42 million units in a range of 5.39 million to 5.51 million. Thus sales were below the lowest estimate.

Housing is the one sector of the economy not showing any life. Existing home sales managed only a 5.340 million annualized rate in July, missing Econoday's consensus of 5.420 million for a 0.7 percent dip from June and the fourth decline in a row. This is the lowest rate in 2-1/2 years. Year-on-year, resales are down 1.5 percent.

Supply doesn't offer any relief either, down 0.5 percent to 1.920 million total resales on the market. Relative to sales, supply is unchanged at 4.3 months. And prices fell in the month, down a monthly 1.5 percent to $269,600 for a 4.5 percent yearly gain that stands in contrast to the yearly decline in sales in a comparison that doesn't point to price traction ahead.

Rising mortgage rates aren't a plus for housing and neither are construction constraints for labor and materials that are slowing the new home market where weakness bleeds into resales. Third-quarter GDP looks to be very solid but apparently won't be getting much lift from residential investment.

The US commercial mortgage market is on the brink of COLLAPSE because of the...