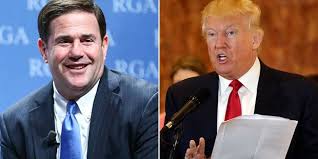 The Arizona governor has grown closer to the White House since cautiously embracing the president in 2016, but can't risk alienating moderate voters.

Arizona Republican Gov. Doug Ducey's decision to replace the late John McCain is as much about his own political future as it is about filling the seat of the six-term senator and decorated war hero.

Republicans with knowledge of the governor's thinking say he'll have to remain deferential to Trump and the White House while also taking care not to alienate a statewide electorate ahead of a tough reelection fight in November.

Ducey — a former Coldstone Creamery chief executive — was hesitant to publicly endorse Trump in 2016 but showed up to at least two closed-door campaign events for him before the election, said one Republican close to the governor.

He has since appeared at official White House gatherings, notably on border security, though he's remained cautious about where he's seen with the president, skipping a Trump rally in Phoenix last year. Ducey, who is close to Vice President Mike Pence, instead met Trump on the tarmac as he arrived in Arizona.

"Doug has certainly done everything, at least that I've observed, in a way that's conducive to a good relationship with Trump," said former Republican Rep. Trent Franks of Arizona. "There might have been disagreements at times, but very rarely has there been anything but expressed support on Doug's part."

Ducey says he's not making any moves until after McCain's funeral as a way to honor his memory.

State Universities Admit They Indoctrinate Instead of Educate

How Arizona'lost control of the epidemic'

AZ Governor Ducey Does It Again