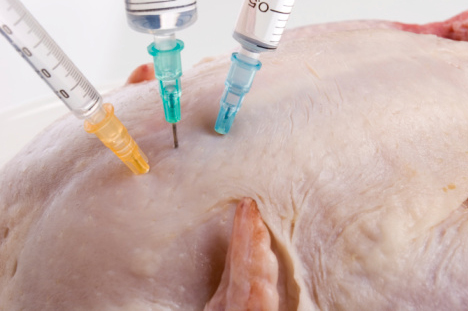 Now, testing reveals chicken and other meats may also contain drugs that are banned for use in food animals.

As reported by Consumer Reports,1 drugs such as ketamine, phenylbutazone and chloramphenicol are all found in the U.S. meat supply.

"The data — as well as Consumer Reports' review of other government documents and interviews with farmers, industry experts, government officials and medical professionals — raise serious concerns about the safeguards put in place to protect the U.S. meat supply,"the article states, adding:2

"These concerns start with how poultry, cattle, and pigs are raised in this country. And they include questions about how the federal government tests meat from these animals, and how it investigates and enforces potential violations."

Banned Drugs Found in Meats Across US

The Department of Agriculture's Food Safety and Inspection Service (FSIS) is the agency responsible for ensuring the safety of the American meat supply. The FSIS test data in question came to light during discovery in a lawsuit against Sanderson Farms, brought by the Organic Consumers Association (OCA), Friends of the Earth and the Center for Food Safety.

Here's How COVID Is Affecting the Food Supply