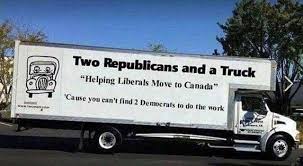 It's a pronouncement so common among aggrieved American liberals that it borders on a political trope. But Moore says he's serious about his plot to vacate the U.S., and not only because of his long-standing affinity for Canada.

For Moore, the prospect of becoming a political refugee seems starkly plausible under the leadership of U.S. President Donald Trump, whom he portrays as a geopolitical threat in "Fahrenheit 11/9," set to hit theatres Friday.

"(Trump) absolutely hates democracy, and he believes in the autocrat, in the authoritarian," Moore said in a recent interview at the Toronto International Film Festival, where the film premiered earlier this month.

"I want us to survive this, but I can't make any guarantees that that's what's going to happen. We're in a bad place. We're on the precipice of some very awful stuff."

A spiritual sequel to Moore's box-office-busting 2004 documentary "Fahrenheit 9/11, "Fahrenheit 11/9" is part political autopsy, part call to action. It offers Moore's interpretation of the forces that led to Trump's election in 2016, and puts forward grim predictions about where his presidency might be headed.

In doing so, Moore revisits hits from his cinematic catalogue of American societal ills and diagnoses new ones, cycling through issues ranging from the February school shooting that killed 17 people in Parkland, Fla., to the water crisis in his hometown of Flint, Mich.

As Moore sees it, there's plenty of blame to go around for the current state of affairs. He argues that out-of-touch political leaders in both major U.S. parties, a sensationalist press corps, corrupt campaign-backers and elite entertainers -- including himself -- helped enable Trump's ascent, which he believes could lead to America's downfall.

The film wavers between optimism about what Moore sees as an emerging populist uprising led by young people, women and minorities, and apocalyptic predictions of an authoritarian takeover of the U.S. government taken straight out of the history books.