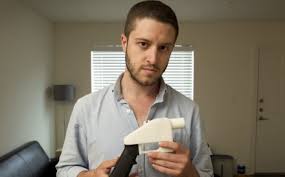 Wilson, 30, was taken to immigration authorities in the capital by officers from Taiwan's Criminal Investigation Bureau, according to local media reports and an official from the bureau who asked not to be named. However, two Taiwanese officials denied Wilson was arrested or in custody. His exact status was unclear.

Because his U.S. passport was later annulled, the agency's statement said, he "no longer has the legal status to stay in Taiwan."

Authored by Joseph Jankowski via PlanetFreeWill.com,

Facing accusations of having sex with a minor, it appears that Cody Wilson, the man behind the 3-D Printable firearms company Defense Distributed, is somewhere in Taiwan being pursued by local police.

According to reporting by Chinese-language media outlet United Daily News, Wilson has skipped his flight home to the U.S. and has attempted to rent an apartment in Taiwan. He appears to have initially passed himself off as an American student living in the city but has since been turned away by a prospected landlord who recognized him and called the authorities.