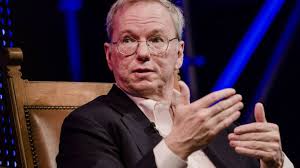 Eric Schmidt, who has been the CEO of Google and executive chairman of its parent company, Alphabet, predicts that within the next decade there will be two distinct internets: one led by the U.S. and the other by China.

At the event, economist Tyler Cowen asked, "What are the chances that the internet fragments over the years?" Schmidt said:

"I think the most likely scenario now is not a splintering, but rather a bifurcation into a Chinese-led internet and a non-Chinese internet led by America.