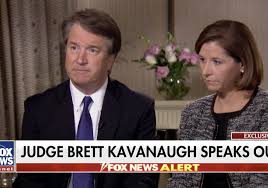 (Natural News) It's a full-in circus at the United States Senate as truly desperate Democrats throw every accusation they can come up with at Brett Kavanaugh in a last-ditch attempt to halt his Supreme Court confirmation.

In an operation that should probably be called Fast and Furious, Democrat operatives are grasping at any allegation, no matter how despicable or disreputable the source. They've even resorted to third-hand anonymous "eyewitnesses" who say they know someone who saw something involving someone who might have been with Kavanaugh some years ago, but they're not completely sure.

But the stories are all collapsing, and some of the allegations now being desperately catapulted in the direction of Kavanaugh appear to have been made by truly "psycho" individuals. Other allegations are rapidly being recanted. Here's a taste of what's breaking on all this just today:

Julie Swetnick's ex-boyfriend says he had to file a restraining order against Swetnick after they broke up–she continued to harass him after he got married to another woman.