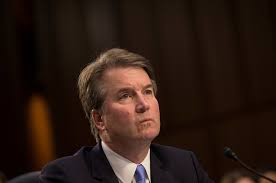 After being given "carte blanche" by the White House to interview Brett Kavanaugh's accusers as well as a smattering of his friends from high school and college, the FBI has wasted no time, with Reuters reporting on Tuesday that they have started questioning Mark Judge, Kavanaugh's high school friend and alleged witness to the SCOTUS nominee's sexually aggressive behavior toward Dr. Christine Blasey Ford.

While Judge's lawyer said that her client's "interview has not been completed," the bureau has also reportedly spoken with PJ Smyth, another one of Kavanaugh's high school contemporaries, who again denied that he witnessed Kavanaugh assaulting Ford.

Judge, author of a book entitled "Wasted: Tales of a Gen X Drunk", "has been interviewed by the FBI but his interview has not been completed, his lawyer said. We request your patience as the FBI completes its investigation," his lawyer said.

However, the most salacious story to emerge since the start of the investigation was delivered by Kavanaugh's former Yale classmate, Chad Ludington, who spoke out on Monday to accuse Kavanaugh of lying to the Senate when he said he'd never "blacked out" from drinking.

Ludington went into more detail in a report that surfaced late Monday evening, when Bloomberg News published Ludington's account of a barroom brawl involving himself, Kavanaugh and former NBA star Chris Dudley at Demery's a longtime Yale hangout in New Haven, Connecticut. Ludington claimed that he witnessed an "aggressive and belligerent" Kavanaugh instigate a fight by throwing a beer in another patron's face after the man brusquely demanded that Kavanaugh and his friends stop staring at him.

The brawl took place after Kavanaugh and his friends were heading back from seeing British band UB40 at a venue in New Haven. While enjoying a few beers at a bar, Kavanaugh and his friends approached a local man whom they mistook for the lead singer of UB40. The man told them to "stop staring" at him, at which point Kavanaugh allegedly became belligerent. After a heated exchange of expletives, a brawl erupted.

"It was sort of a general feature of hanging out with Brett in college," he said in an interview. "When you're having beers on a Friday or Saturday night, that was kind of Brett's shtick. He was aggressive. He was belligerent."

Bloomberg dug up a police report about the incident that identified the local man as Dom Cozzolino. The then-21 year old victim - and UB40 lead singer lookalike - told police that Kavanaugh "threw ice at him". But Ludington claimed that Kavanaugh threw a beer in the man's face, provoking him into taking a swing.

"The next thing you know, Brett throws his beer at the guy," Ludington said. "The guy swings at Brett."

But other friends of Kavanaugh say it's entirely plausible that the judge was being truthful during his testimony. In a statement released Monday, Dudley said he never saw Kavanaugh black out.

Dudley didn't respond to a voicemail and email left at his office asking about the incident in the bar. But in a statement he released Monday, he said "I will say it again, we drank in college."