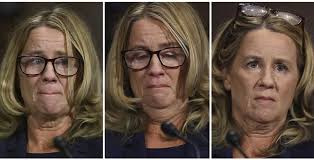 Last week, nearly half of the delegation of the Montgomery County House sent a letter to county police and the Maryland State Attorney to push for an investigation into the baseless claims of Christine Blasey Ford accusing Judge Brett Kavanaugh of sexual assault more than three decades ago.  And they have responded.

The letter was signed by 11 delegates:

"We request an investigation be conducted if Christine Blasey Ford or other complainants support such an investigation," the letter read. "We believe local law enforcement has the authority to investigate allegations of crimes without need for a formal complaint, and we further believe third parties have standing to bring such complaints."

Both the Montgomery County Chief of Police and the Maryland State Attorney's Office issued a joint response to the delegates' letter.  In that response, it would first require that Ford actually file a criminal complaint, something she has not done.  Instead, she chose a political route, indicating that this was a political hit.

Furthermore, the delegation was told that the statute of limitations for Ford's accusations had run out, adding just one more reason why the committee should have ignored her accusations.

The letter was addressed to Ariana B. Kelly.  Here is the full response:

This letter is in response to your September 25, 2018 request that the Montgomery County Police Department and State's Attorney's Office open a criminal investigation involving sexual assault allegations against Judge Brett Kavanaugh. First, let us be clear that our agencies take seriously all criminal reports of sexual assault or rape against any victim. The decision to report the crime of sexual assault or rape to law enforcement is a deeply personal one and a decision that must be made by the survivor. Our agencies understand and appreciate the impact that sexual assault has on survivors and investigates all reports to law enforcement to the fullest extent.