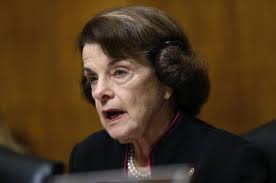 On Saturday, Senator Bill Cassidy (R-LA) said that Senator Dianne Feinstein (D-CA) should be asked under oath whether she leaked the letter to the public that Christine Blasey Ford sent to her.  On Sunday, Senator Tom Cotton (R-AR) said during an interview on CBS' Face the Nation that Senator Feinstein's office will be investigated to determine whether it leaked Ford's letter, and that in addition to an investigation into attorneys that Feinstein recommended to her that told her Senate Judiciary Committee staffers would not travel to California to conduct an interview with her concerning her allegations against Judge Brett Kavanaugh.

"They have betrayed her," Cotton said of Democrats betraying the trust of Ford.  "She has been victimized by Democrats … on a search-and-destroy mission for Brett Kavanaugh."

"Any impact that this entire episode has had," Cotton told John Dickerson, "on women's willingness to come forward and report sexual assault, which I encourage them all to do immediately after it happens, is caused by the Democrats, is caused by Dianne Feinstein and Chuck Schumer not respecting her requests for confidentiality."

Part of the problem I have thinking that Ford is the victim here is the fact that we have audio evidence that the Democrats were already planning a major attack on Kavanaugh at the very same time in June that Ford sent her letter.  On top of that, Ford is a radical activist that advances baby murder and according to forensic profiler Andrew Hodges, M.D. she is one that has probably perpetrated the very crime she is projecting onto Kavanaugh.  Additionally, the altering of her Stanford bio page several times during September is also telling as to her involvement in this entire political hit.

On that last one, Jim Hoft at Gateway Pundit writes:

However a search through the Department of Consumer Affairs License Bureau produced NO RESULTS for Christine Ford or deviations of her name.

Earlier this week NPR explained why they don't call Christine Ford a doctor because they reserve the title of "Dr." for an individual who holds a doctor of dental surgery, medicine, optometry, osteopathic medicine, podiatric medicine or veterinary medicine..