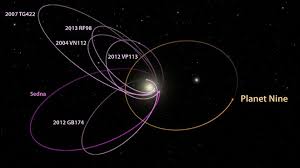 Scientists have discovered yet another marker on the trail toward the putative Planet Nine.

That clue is 2015 TG387, a newfound object in the far outer solar system, way beyond Pluto. The orbit of 2015 TG387 shares peculiarities with those of other extremely far-flung bodies, which appear to have been shaped by the gravity of a very large object in that distant, frigid realm — the hypothesized Planet Nine, also known as Planet X.

"These distant objects are like breadcrumbs leading us to Planet X," study leader Scott Sheppard, of the Carnegie Institution for Science in Washington, D.C., said in a statement. [The Evidence for 'Planet Nine' in Our Solar System (Gallery)]

"The more of them we can find, the better we can understand the outer solar system and the possible planet that we think is shaping their orbits — a discovery that would redefine our knowledge of the solar system's evolution," he added.

And 2015 TG387 is special among these bread crumbs, because it was found during a relatively uniform survey of the northern and southern skies rather than a targeted hunt for clustered objects in certain parts of the sky, Sheppard said. Targeted hunts can produce biased results — for example, the appearance of clustering where none may actually exist, he explained.

2015 TG387 has two dwarf-planet companions in the low-bias class, Sheppard said: 2012 VP113, which he and his colleague Chadwick Trujillo (who's a co-author of the new paper as well) spotted in 2014 as part of the same, ongoing long-term survey; and the relatively bright Sedna (because the whole sky has been searched to its level of brightness).

"And then if you bring in some of the other extreme objects — several of them were found in our survey as well," Sheppard told Space.com. "The statistics get better and better that this planet is likely out there."