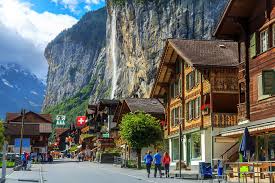 Is there any hope in the Western World that individual citizens can win some release from the relentless and imprisoning growth of government? In the US, government spending, a reasonable proxy for their power over us, increases every year, except for a few minor blips. The citizens' situation becomes more and more dire. We have precious little say and little influence over our taxes, our health care, our energy and water supplies and costs, not to mention the social rules with which the government constrains us. The number of rules and regulations, using the proxy of pages in the Federal Register, also increases every year, and very few rules are removed. The government closes in on us more and more every day.

There is one western country that we might look at to see a glimpse of hope. That country is Switzerland. In a small landlocked country with precious little in the way of natural resources except water, the people have created a high level of prosperity based on innovation and creative capitalism.

Prior to its 1848 constitution, Switzerland was a confederation of states, each of which was sovereign and independent, bound together by a treaty of mutual defense from external aggression. As a country, it was the most economically developed in Europe. It was religiously and ethnically diverse, highly innovative and highly productive. Huguenots expelled from France in religious wars started the Swiss watch industry, and German protestants escaping Catholic oppression founded major industrial companies. There was a focus on knowledge and education to compensate for the lack of natural resources, and the Swiss were globally networked and energetic traders.

"Economics was everywhere and politics nowhere" was a phrase used to describe this productive, energetic, innovative, decentralized trading nation in the mid-nineteenth century. What a wonderful picture of economic freedom unencumbered by political extraction is conjured up by that description.

Switzerland has been able to retain some of these characteristics despite the predations of the twentieth century. It stayed on a gold standard until 1999, and resisted internationalization until it joined the UN in 2002. In fact, internationalization is what has eroded Switzerland's uniqueness as a nation. The influx of internationally-oriented MBA's and the McKinsey mafia is dragging Switzerland down toward the lowest common denominator of statism and interventionism. The EU aims to get Switzerland to sign a bilateral agreement which will inevitably lead to Brussels gradually imposing its multicultural socialism, just as it did on the UK.

Nevertheless, Switzerland has at least six structural advantages which will keep it ahead of its mediocre peers for a while longer.

How We Institutionalized Incompetence

Six Thousand Doctors Speak Out Against the Lockdowns! It Will Kill More People Than CV-19!!!