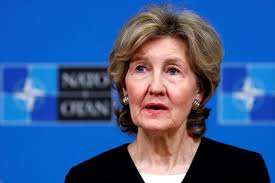 Earlier today the U.S. ambassador to NATO threatened to "take out" a new kind of Russian missiles:

The U.S. envoy to NATO on Tuesday said that Russia must halt development of new missiles that could carry nuclear warheads and warned that the United States could "take out" the system if it becomes operational.

The U.S. and Russia have for some time disagreed about the INF treaty. The Intermediate-Range Nuclear Forces Treaty was signed in 1987 between the Soviet General Secretary Gorbachov and U.S. President Reagan. It prohibits land based (not sea based) nuclear capable systems with a range of more than 500 kilometers and less than 5,500 kilometers. The agreement came to pass after the Soviets stationed SS-20 missiles in East Europe. NATO responded with the Pershing II deployment. The problem with these missiles was warning time. Fired at a relative short range they threatened to overwhelm one side before it could respond. The missiles thus destroyed the equilibrium of Mutual Assured Destruction (MAD). The INF treaty banned these missiles.

Russia said for years that the U.S. broke the INF agreement when it stationed missile defense systems in Europe to allegedly take out North Korean and Iranian intercontinental missiles. The missile defense missiles could be armed with nuclear warheads and could probably be used in a surface-to-surface mode. Previously deployed U.S. Nike-Hercules 'air defense' missiles had such capabilities. The National Defense Authorization Act for the year 2018 calls for (pdf, pg 240):

Any such modification would be undetectable from the outside, especially when the missiles are stored in launch canisters or silos. It would also clearly be in breach of the INF treaty.

The U.S. ambassador to NATO is Kay Baily Hutchinson, a long-term Republican politician with no military experience. Her choice of words in today's press briefing was clearly unprofessional:

Question: [...] Ma'am, can you be more specific what kind of new information that you are bringing to the table regarding the breach of the INF Treaty? And more explicitly also, what kind of countermeasures that you are considering.

Ambassador Hutchison: The countermeasures would be to take out the missiles that are in development by Russia in violation of the treaty. So that would be the countermeasure eventually. We are trying not to do anything that would violate the treaty on our side, which allows research, but not going forward into development, and we are carefully keeping the INF Treaty requirements on our side, while Russia is violating. ...

The reporters in the room were in disbelieve over such aggressive wording and followed up:

Question: Thanks, Ambassador. Lorne [Inaudible], Associated Press. Just to clarify a little bit when you said to take out the missiles that are in development, we are a little excited here. Do you mean to get those withdrawn? You don't mean to actually take them out in a more [inaudible]?

Ambassador Hutchison: Well, withdrawing, yes. Getting them to withdraw would be our choice, of course. But I think the question was what would you do if this continues to a point where we know that they are capable of delivering. And at that point we would then be looking at a capability to take out a missile that could hit any of our countries in Europe and hit America in Alaska. So it is in all of our interests, and Canada as well, I suppose. So we have our North Atlantic risk as well as the European risk.