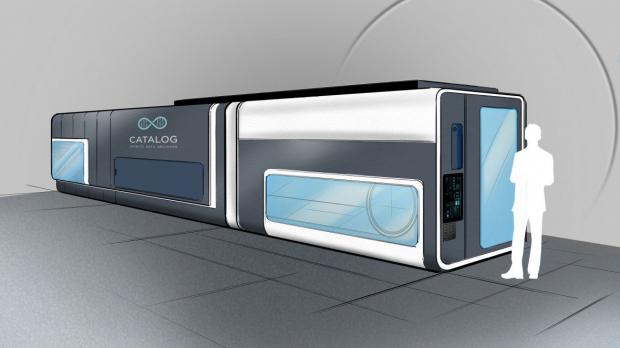 In a world awash with data, DNA is a hugely compact way to store it. The data on every iPhone, PC, and server rack on the planet could fit in a Jacuzzi's worth of genetic letters, for example. It's also incredibly durable: DNA can last for thousands of years so long as it's kept relatively cool and dry.

Now, one of the fledgling industry's startups has unveiled plans for its prototype storage device: a hulking school-bus-size machine that could one day convert movies or data archives into invisible pellets of DNA. The device is being built by Catalog Technologies along with UK firm Cambridge Consultants, it was announced today.

Several teams have already shown it's possible to store GIFs, books, gift cards, and other data in DNA and then retrieve these files.

The problem is that converting bits into the As, Gs, Cs, and Ts of the genetic code is slow, and it's a laborious process to retrieve the data. The cost of manufacturing customized DNA is also high, running near a million dollars to store a couple of high-resolution DVDs.