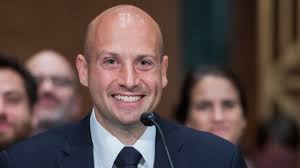 A Bitcoin exchange-traded fund sanction by the US Securities and Exchange Commission is widely perceived as one of the catalysts for a potential rally of cryptocurrency prices. Despite the recent rejections, the Commission might see its voting balance re-distributed as Trump appoints a pro-crypto character as his latest Commissioner.

Republican Elad Roisman is the fourth appointment of President Donald J. Trump to the Securities and Exchange Commission (SEC). This is serious news for the field of cryptocurrencies as Roisman has already signaled his intentions to focus further legislative attention on the fair treatment of digital coins.

Speaking at a hearing before the Senate Banking Committee in July, the newly appointed commissioner said:

…the SEC must examine and re-examine its rules, regulations and guidelines to ensure that they are still working as intended to accomplish the SEC's mission. This is most recently manifested in areas such as data protection and cybersecurity, as well as the emergence of new investments and technologies such as initial coin offerings and blockchain.

Roisman also noted that it's important for the Commission to be transparent when approaching the challenges set forth by the nascent industry:

It is essential that the SEC approach these new challenges in a fair and transparent manner, provide clarity and certainty to the markets and investors, and enforce the laws and regulations that hold market participants accountable.

A handful of companies have filed applications with the SEC for an approval of a Bitcoin ETF. Many believe that this is likely to become the catalyst the market needs to provoke another impressive price rally, and, although no applications have yet been approved, there is a glimmer of hope as we appear to be inching in that direction.

Back in mid-July of this year, the SEC turned down the application filed by Cameron and Tyler Winklevoss. This decision was met with the formal dissent of Commissioner Hester Pierce, who voiced her disagreement publicly.