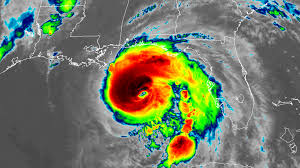 Despite the downgrades, Michael has cemented its status as the third most powerful storm to ever make landfall in the Continental US. Strong winds and torrential rains continued to batter Georgia overnight and have spread to South Carolina as well. According to Accuweather, winds reached 60 mph across Georgia overnight, and speeds were expected across the Carolinas over the next 24 hours.

More than 700,000 homes and businesses had lost power in Florida, Alabama and Georgia early on Thursday. The governors of North and South Carolina warned about coming heavy rain and storm-force winds as Michael moved north along the Atlantic seaboard. The NHC warned that the storm could cause life-threatening flash flooding on Thursday and Friday across the Carolinas, Georgia and as far away as Virginia.

To provide an update on the status of disaster relief, the head of the NHC will give a news conference at 8:30 am ET:

As residents prepare themselves for the monumental task of rebuilding after the storm reduced thousands of homes to splinters, scientists and first responders are reflecting on how Michael intensified from a tropical storm with negligible expected impact on Saturday to a borderline Category 5 storm that was among the most powerful to ever come ashore in the US - and certainly the most powerful storm to ever hit the Florida panhandle since record-keeping began. One Panama City resident who spoke with the New York Times put it best.

In Florida alone, 6,700 people were in 54 shelters. The National Guard activated 3,500 troops, and the authorities said 1.5 million meals were expected to be distributed along with one million gallons of water. Much of the area in the storm's projected path was under a tropical storm warning.

Trump promised to be "totally focused" on the storm despite appearing at a campaign rally in Philadelphia, saying he would send his "unwavering love and support" and "sparing no effort, no expense, no resource to help these great fellow citizens of ours who are going through a tough time right now."

Tropical Storm Cristobal Set To Strike US This Weekend

Scientists warn of freezing weather, famine and earthquakes as sun goes into 'lockdown'

Scientists warn of freezing weather, famine and earthquakes as sun goes into 'lockdown'

Huge swarms of locusts rip through 500,000 acres of crops in Ethiopia...

Tornadoes kill at least 24 across the South leaving 1.3million without power...

Huge chunk of Yellowstone National Park, the size of Chicago, is 'breathing' ...