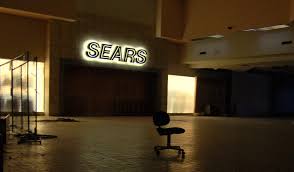 Amid recent reports that Sears is set to file for bankruptcy as soon as this weekend ahead of a $134 million debt payment due on Monday, the only question is whether the filing will be a Chapter 11 debt for equity reorganization or a Chapter 7 liquidation. And contrary to the desires of Sears CEO and biggest creditor, Eddie Lampert, who would like to preserve the core business, others are pushing for an outright liquidation.

According to the WSJ, a group of Sears' biggest lenders, including Bank of America Corp., Wells Fargo & Co. and Citigroup Inc., are pushing for the company to liquidate its assets under a chapter 7 bankruptcy filing, as opposed to reorganizing the business under chapter 11, this person said.

The consensus reportedly emerged after Sears met with its lenders Wednesday night to discuss emergency financing for the embattled retailer. The meeting ended without an agreement that would keep Sears operating as a going concern, the WSJ reports.

At Wednesday's meeting, Sears proposed a restructuring plan to shrink its store base dramatically, at which point it expected to be profitable, the person said. But the banks argued the safest way for them to recoup their money is to sell all of the remaining stores and liquidate the inventory, the person said.

The meeting Wednesday night in New York City included dozens of bankers, lawyers and advisers, but broke up after about an hour with no agreement reached.

The banks are the principal lenders on the company's $1.5 billion asset-backed credit line secured by store inventory, as well as credit-card and pharmacy receivables. Their interest in a liquidation is simply so they get repaid instead of getting primed by even more secured debt. As a reminder, asset-backed lenders are typically first in line to be repaid in full, often with the proceeds of liquidation sales in retailer bankruptcy cases.

What is odd is that with a bankruptcy filing looming, Sears, which has been working with advisers on restructuring efforts, still has not lined up a DIP loan, i.e., a bankruptcy financing.

Meanwhile, hedge fund manager Edward Lampert, who controls Sears, and who has repeatedly bailed out the struggling retailer with short-term loans, doesn't plan to lend the company money to make Monday's payment, according to people familiar with the matter.

Last month, the CEO proposed an out-of-court restructuring that would slash more than $1 billion from Sears's $5.5 billion debt load, divest another $1.5 billion of real estate and sell $1.75 billion of assets, including the Kenmore appliance brand, which Mr. Lampert offered to buy for $400 million.

The Sears board decided not to move forward with the Kenmore transaction, after it became clear this week that Mr. Lampert's broader restructuring plan wasn't winning support from creditors, another person said. That prompted the company to seek emergency financing from its lenders.