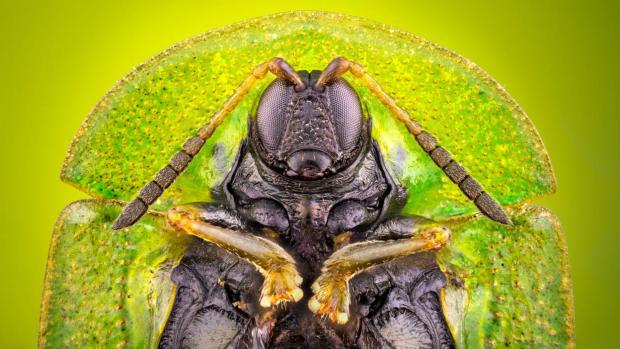 The winning image this year, selected from nearly 2,500 entries, came from United Arab Emirates-based photographer Yousef Al Habshi. Zooming in on a unique type of beetle, only found in the Philippines, Habshi's image captures the green scales surrounding the weevil's compound eye in never-before-seen detail.

"Because of the variety of coloring and the lines that display in the eyes of insects, I feel like I'm photographing a collection of jewelry," says Al Habshi. "Not all people appreciate small species, particularly insects. Through photomicrography we can find a whole new, beautiful world which hasn't been seen before. It's like discovering what lies under the ocean's surface."

Second place went to an equally extraordinary image of a Fern sorus. This striking snap used autoflorecence, capturing incredible colors by striking the structure with ultraviolet light. Third place was given to a somewhat more traditional, but no less spectacular, image of a spittlebug in the midst of constructing its "bubble house", a protective structure made from a foam substance.