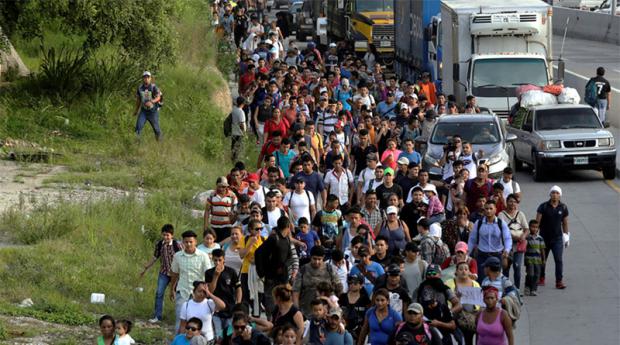 An estimated 2,500 - 3,000 Honduran migrants crossed into Guatemala on Monday for a second northbound trek to the US border in six months, following a tense standoff with police in riot gear.

Rows of Guatemalan police in black uniforms, some wearing helmets and shields, initially blocked migrants from reaching a customs booth, Reuters images showed. It was not clear how long the standoff lasted, but the group was ultimately able to cross, said march organizer Bartolo Fuentes, a former Honduran lawmaker.

A police official on site said all Central Americans could pass freely through the region as long as they complied with migration control. -Yahoo!

"We're going to drop in on Donald Trump. He has to take us in," said 24-year-old Andrea Fernandez, who left Honduras with a newborn baby, a 5-year-old daughter and 7-year-old son because she said she could not find work and feared for their safety.