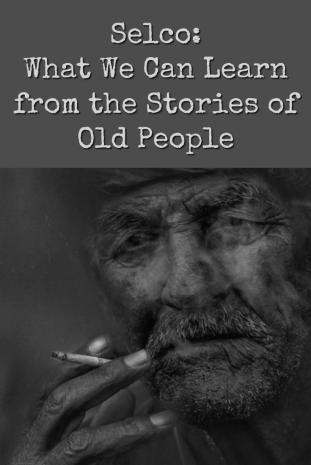 Note: Here's one of the stories in Selco's new book, SHTF Survival Stories, Vol. 1, which you can purchase here for only $6.49.

These story collections can only be found in the PDF books and are not available anywhere online. Volume 1 contains 17 stories. I found that the book reads a lot like survival fiction short stories – except for the fact that they're all true. In this one, he discusses what he learned from his Great Uncle, a war veteran, and encourages us to learn from the stories of old people.

Selco manages to share the brutality of those times and still add in the glimpses of humanity that are so important.Because without it, we're just animals. ~ Daisy

My great uncle was a drinking man. He would drink heavily from the moment when he woke up until the moment he went to bed, but I do not remember ever seeing him stumbling, walking funny, or having problems with his speech.

When he was at home his favorite spot was on the couch in the corner of the room, just next to the wood stove which was running always except on really hot days.

He drank from very small glasses (shot glasses), the bottle was never visible (he kept bottle behind the couch) on the table there was the silver box for cigarettes, with tobacco and papers for cigarette rolling inside, and his shot glass.

The table was old type table with a glass plate on top of it, and under that glass, he kept paper that says that government and state recognize him as a member and organizer of the early resistance movement against the German and Italian occupation (WW2).

Table, his cigarette box, his rakija and everything else in his room was off limits for us kids. He lived with my grandparents, he never married, no kids.

Actually, now when I remember he himself was pretty much off limits for us kids, the only person who ever had some influence over him was my grandmother-his sister, she was the only one who could tell him sometimes that he needs to do something.

He was one tough and dangerous old dude, sitting in the room. Drinking and staring in the spot where the wall connects to the ceiling.

Sometimes we kid sneak in the room, seeking stories, or money from him, in return we would bring firewood from the shed for his never-ending stove fire.

He would give us money often from his big "veteran warrior" pension, stories were rare.

Often kids just sat there, talking something, he would occasionally say "umm" or "hmm" and stare in empty space.

He did not go out very much, except for his regular chess meetings in the local community hall, a war veteran organization and heavy drinking joint place in one.

People call it "half leg" because of several handicapped folks who were there all the time.

And I was a kid who often went with him there, my grandmother often would tell me "go with him there and wait for him", I guess she simply was worried for him.

The place was a big hall with old tables with games like chess and checkers on them. Great Uncle would sit down usually with same folks there, his old war comrades.

They would play chess, drink heavy booze and over the time they would usually forget that I am even there.

In that time, I was taught in the school that we are living in great socialistic and communistic society, where all people are equal, and that we got to that point through the heroic and noble fighting of working class in WW2.