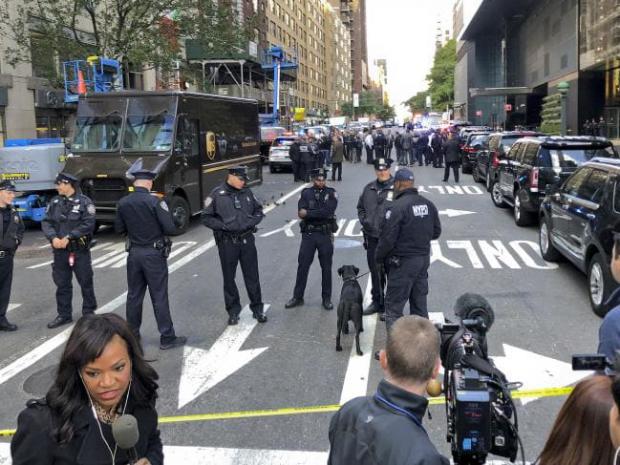 Update V: Speaking at an event in Florida, Hillary Clinton said that, while she and her family are "fine" thanks to hardworking Secret Service agents, she's worried about the "deep divisions" across the US.

"Many of you and others across our country have asked after me and my family and I'm very grateful for that. We are fine thanks to the men and women of the Secret Service who intercepted the package addressed to us long before it made its way to our home."

"It is a troubling time, isn't it? It's a time of deep divisions and we have to do everything we can to bring our country together."

Meanwhile, CNN is reporting that the ATF is on the scene in New York, Washington and Florida.

Officials with the Bureau of Alcohol, Tobacco, Firearms and Explosive are on scene Wednesday at the site of the multiple suspicious packages.

They responding to packages mailed to officials in DC, and are at the Time Warner Center in New York and the office of Rep. Debbie Wasserman Schultz in Sunrise, Florida, ATF spokesperson April Langwell said.

They were also in New York at George Soros' home Tuesday, she said.

CNN is also reporting that the suspicious package discovered at Wasserman Schultz's office had been addressed to former Attorney General Eric Holder. It was returned to Schultz's office because - like the packages sent to CNN, the Clintons, Obamas and Soros - it had her name listed on the return address.

A suspicious package was sent to Eric Holder but it had the wrong address and was returned to Rep. Debbie Wasserman Schultz's office in Florida because that was the return label on the package, according to two law enforcement sources.

The same return address was used for the Clinton and Obama suspicious packages.

Update IV: President Trump and Vice President Mike Pence both condemned the attempting bombings, with Pence saying these "despicable" acts have "no place in our country" and Trump adding that he agreed "wholeheartedly." 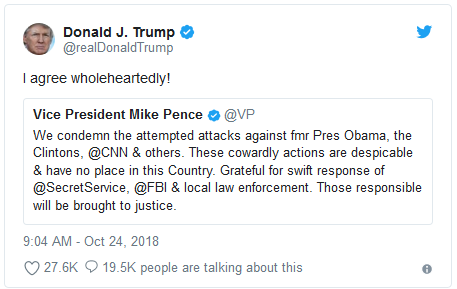