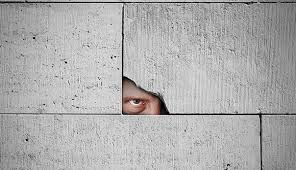 If you acknowledge that they have the power to annoy you, they become little tyrants. And their parents would probably see it as an overreaction to rip their finger off the next time they poke you.

There's really nothing you can do to stop them from poking you and still come out of the situation with your dignity. To physically force them to stop would be a massive overreaction. And to tell them to stop, poke them back, or appear annoyed will only encourage them further.

You just have to ride it out. They'll eventually get bored, much quicker than you could be rid of the little brat by engaging.

And victims have to use the same method to get rid of them.

Of course, simply ignoring them is not enough. Since the situation could become violent, you actually have to be prepared to "rip their fingers off" if they keep poking you.

But according to Gavin de Becker in The Gift of Fear, most of the time, strictly cutting off all communication is the best tool you have.

The Gift of Fear is a book about how to recognize and respond to psychological tricks that bad people use against their victims.

To get a stalker or crazy ex out of your life, you have to cut them off completely, de Becker says.

"He views any response as progress. If you call the pursuer back, or agree to meet, or send him a note or have somebody warn him off, you buy another six weeks of his unwanted pursuit."

Even sending the police is not a good idea, unless the stalker has committed a serious crime that he or she will be arrested for. Same goes for a court order that may just infuriate the stalker, and escalate the harassment.

Telling the stalker over and over that you don't want to hear from him means he gets to talk to you over and over. Sending others to threaten him will give him a sort of satisfaction, and could escalate the danger.