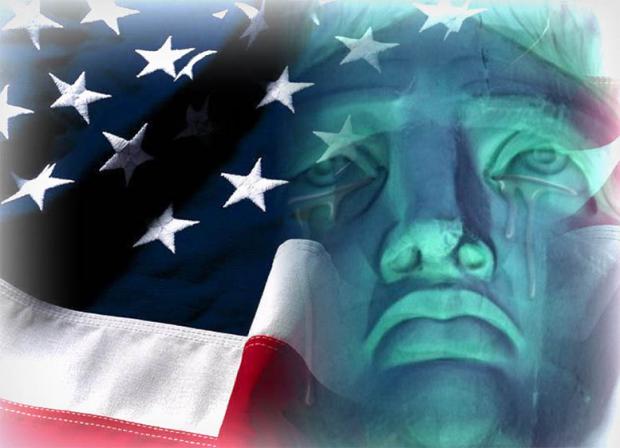 "As nightfall does not come at once, neither does oppression. In both instances, there is a twilight when everything remains seemingly unchanged. And it is in such twilight that we all must be most aware of change in the air – however slight – lest we become unwitting victims of the darkness." ? Supreme Court Justice William O. Douglas

Yet another smear of ugliness, hatred and violence.

Yet another ratcheting up of the calls for the government to clamp down on the citizenry by imposing more costly security measures without any real benefit, more militarized police, more surveillance, more widespread mental health screening of the general population, more threat assessments and behavioral sensing warnings, more gun control measures, more surveillance cameras with facial recognition capabilities, more "See Something, Say Something" programs aimed at turning Americans into snitches and spies, more metal detectors and whole-body imaging devices at so-called soft targets, more roaming squads of militarized police empowered to do more stop-and-frisk searches, more fusion centers to centralize and disseminate information to law enforcement agencies, and more government monitoring of what Americans say and do, where they go, what they buy and how they spend their time.

All of these measures play into the government's hands.

All of these measures add up to more government power, less real security and far less freedom.

As we have learned the hard way, the phantom promise of safety in exchange for restricted or regulated liberty is a false, misguided doctrine that has no basis in the truth.

When things start to fall apart or implode, ask yourself: who stands to benefit?

In most cases, it's the government that stands to benefit by amassing greater powers at the citizenry's expense.

Unfortunately, the government's answer to civil unrest and societal violence, as always, will lead us further down the road we've travelled since 9/11 towards totalitarianism and away from freedom.

With alarming regularity, the nation is being subjected to a spate of violence that not only terrorizes the public but also destabilizes the country's fragile ecosystem, and gives the government greater justifications to crack down, lock down, and institute even more authoritarian policies for the so-called sake of national security without many objections from the citizenry.

Clearly, America is being pushed to the brink of a national nervous breakdown.

This breakdown—triggered by polarizing circus politics, media-fed mass hysteria, racism, classism, xenophobia, militarization and militainment (the selling of war and violence as entertainment), a sense of hopelessness and powerlessness in the face of growing government corruption and brutality, and a growing economic divide that has much of the population struggling to get by—is manifesting itself in madness, mayhem and an utter disregard for the very principles and liberties that have kept us out of the clutches of totalitarianism for so long.

Yet there is a method to this madness.

Remember, authoritarian regimes begin with incremental steps. Overcriminalization, surveillance of innocent citizens, imprisonment for nonviolent—victimless—crimes, etc. Bit by bit, the citizenry finds its freedoms being curtailed and undermined for the sake of national security. And slowly the populace begins to submit.

No one speaks up for those being targeted.

No one resists these minor acts of oppression.

No one recognizes the indoctrination into tyranny for what it is.

Historically this failure to speak truth to power has resulted in whole populations being conditioned to tolerate unspoken cruelty toward their fellow human beings, a bystander syndrome in which people remain silent and disengaged—mere onlookers—in the face of abject horrors and injustice.

Time has insulated us from the violence perpetrated by past regimes in their pursuit of power: the crucifixion and slaughter of innocents by the Romans, the torture of the Inquisition, the atrocities of the Nazis, the butchery of the Fascists, the bloodshed by the Communists, and the cold-blooded war machines run by the military industrial complex.

We can disassociate from such violence.

We can convince ourselves that we are somehow different from the victims of government abuse.

We can continue to spout empty campaign rhetoric about how great America is, despite the evidence to the contrary.

We can avoid responsibility for holding the government accountable.

We can zip our lips and bind our hands and shut our eyes.

In other words, we can continue to exist in a state of denial.

Whatever we do or don't do, it won't change the facts: the nation is imploding, and our republic is being pushed ever closer to martial law.